Looking for the best beginner’s competition pistol out  there?  Well we’ve compiled a list of handguns that we absolutely slayed with and would recommend to anyone looking to get into competitive shooting!  Keep reading for more…

In this list, I’ll discuss some of the best beginner competition pistols that you must have!

According to individual accuracy, reliability, ergonomics, and overall quality build, here are some of the best shooting pistols found in the market. I included various budgets and features to fit every taste. 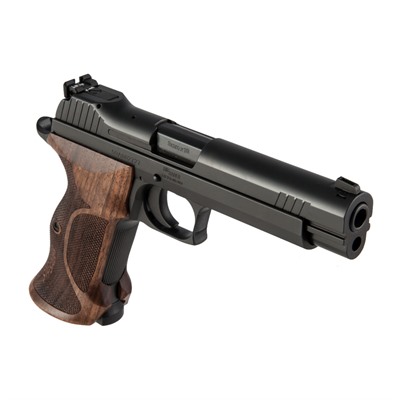 Sig Sauer is a legendary name in the world of competitive shooting. Outside sports, it’s frequently used by law enforcement, military personnel, and commercial consumers for home and personal protection. Therefore, it isn’t much of a surprise that Sig Sauer sits on top of this list.

Among Sig Sauer’s many products, one that particularly stands out, is the P210 Target.

For more information on competition shooting check out USPSA.

The SS P210 Target is a classic full-size single-stack pistol. The original P210 was initially released in 1947 and served most of its life in the Swiss military. It’s much desired due to its startling accuracy and exceptional trigger control, perhaps even more so than any other Swiss pistol brand at the time.

Compared to the original, the modern P210 has a reshaped trigger guard, a fiber optic front sight, an adjustable rear sight, and a beavertail grip. Furthermore, the manual safety is redone and significantly increased.

For a single action-only pistol, its trigger control is one of the best I’ve seen. The pull is incredibly smooth and light, and its updated ergonomic grip makes it an absolute pleasure to use, even with inexperienced hands. 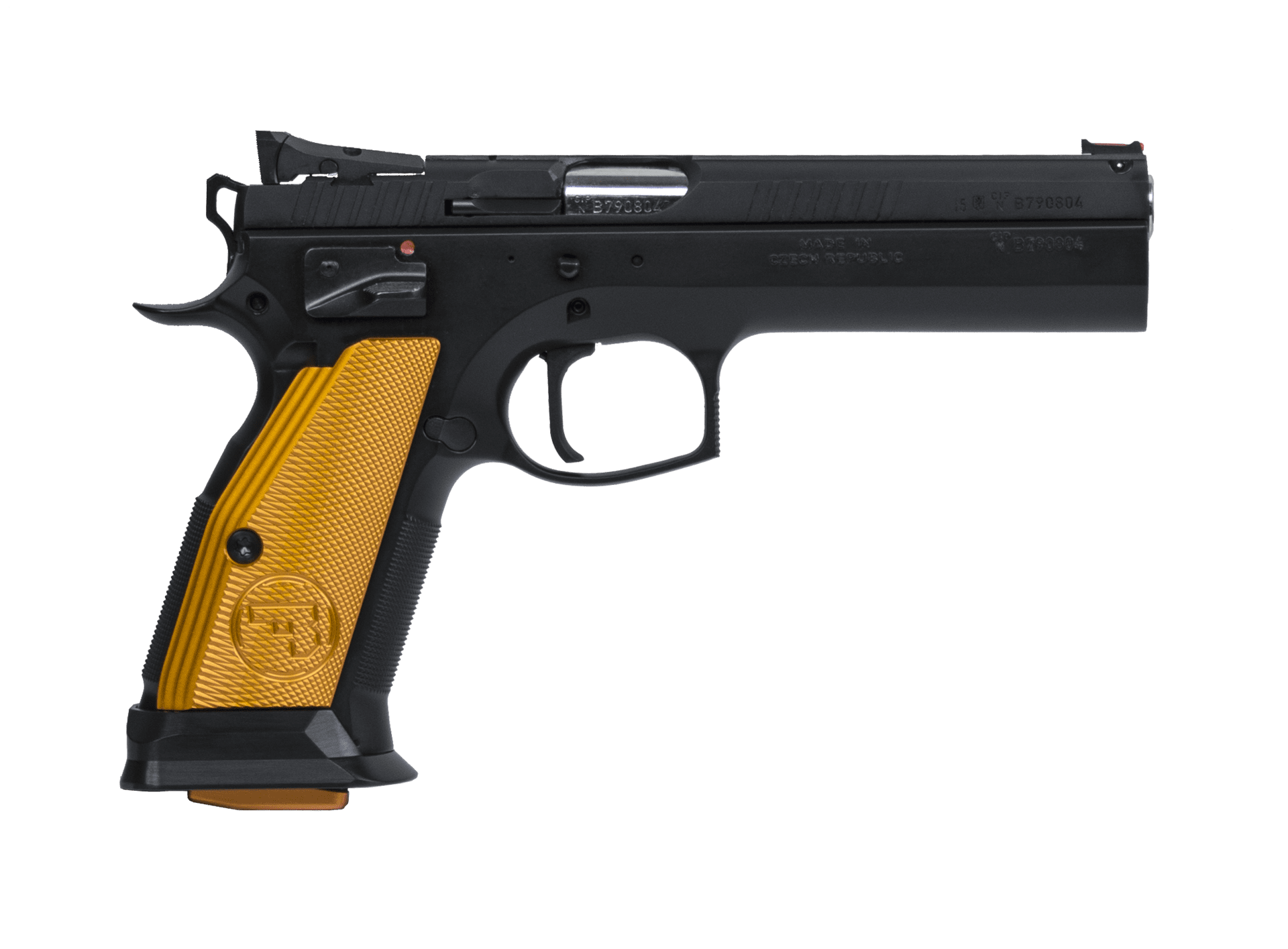 For those who watch and/or partake in IPSC competitions, you indeed recognize the CZ 75 Tactical Sport. It has long been a favorite among competitive shooters, primarily because it’s purposely manufactured for practical shooting competitions.

The CZ 75 Tactical Sport is a big, bulky gun designed with muted steel frames and thin aluminum grips. While not the “prettiest” gun around, its functionality is second to none.

Compared to other competitive pistols on this list, the CZ 75 Tactical Sport is quite bulky at 47.3 oz unloaded. However, this is mainly because it has the capacity to load up to three magazines of 16 rounds at a time.

A similarly popular target pistol, the Ruger Mark III, weighs 42 oz with only one magazine. Hence, I think it’s safe to say that the CZ 75 isn’t as heavy as regular three-magazine pistols.

The CZ 75 comes in two calibers: 9mm and 40mm. The 9mm caliber option is more manageable for beginners to get, as it’s widely available and relatively cheap.

However, it’s important to note that the 40mm caliber has a scoring advantage under IPSC rules. Regardless, it’s best to choose the caliber depending on your personal taste rather than the scoring advantage for your own comfort, especially if you’re a beginner.

Similar to the Sig Sauer P210 Target, the CZ 75 is a single action only trigger. As it’s primarily designed for competitive racing and target shooting, it has a flared mag well (for faster reload), oversized controls (for easier operation when wearing heavy gloves), and aggressive checkering (for better grip). It also comes with adjustable target sights that greatly help with aim.

The trigger found in the CZ 75 is exceptionally crisp. The sear/hammer engagement has a bit of wiggle to it, but not enough to make it a deal-breaker.

Overall, the CZ 75 has great accuracy, quality construction, and a generous magazine, all of which make it an easy-to-load, easy-to-aim hand pistol. 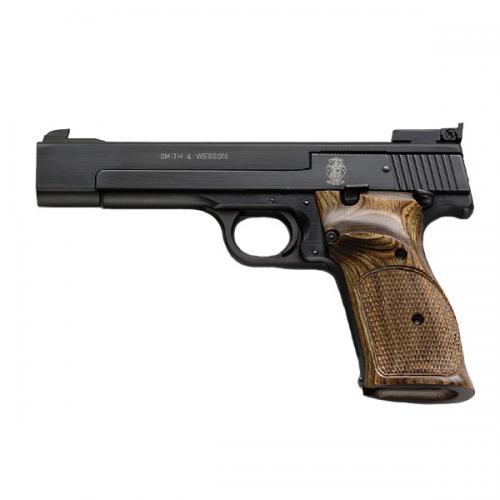 I think it’s fair to say that we’ve all heard of Smith and Wesson at one point. After all, its history dates back all the way to 1856, making it one of the oldest firearm and ammunition manufacturers in the US.

The Smith and Wesson Mod 41 is among the company’s most popular models due to its gorgeous design, ease of use, and reliability.

The wood slash metal fit and finish are absolutely striking; they really make you feel like you’re holding something premium. If you want a pistol that’ll attract the interest of other range-goers, you might want to get yourself a Mod 41.

Looks aside, the Mod 41’s performance doesn’t disappoint, either. It’s a 22 caliber target LR pistol and has the same operation as a 1911 handgun. Many who’ve used a Mod 41 claimed that it “instinctively became an extension” of their hand, which says a lot about its handling characteristics and ergonomic grip.

The Mod 41 borrows much of its qualities from premium level semi-auto target pistols. It has a 5.5-in carbon steel barrel and a crisp 2.7-lb trigger pull, making target shooting look like it’s the easiest thing in the world. Plus, it weighs only 41 oz. Granted, it’s not the lightest pistol in the world, but one could say it’s “just right”—not too heavy, but not too light.

Because it’s mostly used in target shooting and competitions, it isn’t a surprise that Mod 41 has an extremely accurate shot. The trigger stop is adjustable, too, so you can customize it to your liking.

The quick detach barrel is likewise a welcome feature, as it makes disassembly and reassembly as easy as one-two-three. 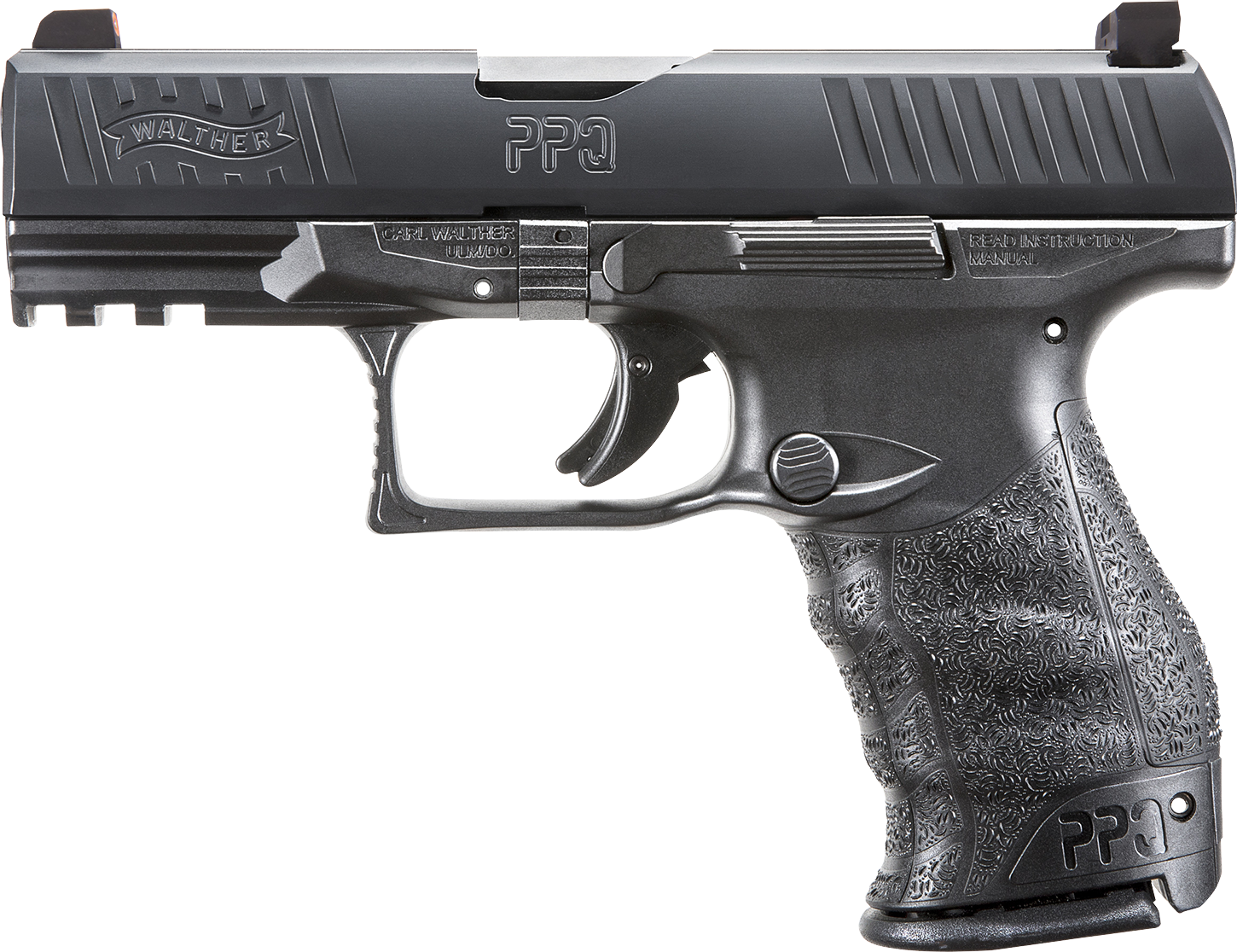 The Walther PPQ semi-automatic pistol that balances price and functionality.

Like all the other pistols on this list, the PPQ is a full-sized semi-auto with a high shot capacity and a rapid firing and reload speed.

This pistol shares most of its engineering properties with Walther’s P99QA variant that was initially manufactured in the year 2000. However, compared to the P99QA, the PPW is designed with a fully cocked striker rather than a partially cocked one. This allows users to shoot consecutive shots faster and easier. Plus, it has reduced recoil.

The tiny size of it fits perfectly into one of our concealment end table options.

Design-wise, the PPQ is much like a Glock. It has an extended ambidextrous slide release lever, making it suitable for both right-handed and left-handed shooters. Furthermore, the bottom of the frame has a Picatinny rail, which makes it fairly easy to add lasers to aid you with target practice. Plus, its five-pound trigger has a decent break and a relatively short reset.

That said, the PPQ’s trigger pull is lighter and crisper than that of most Glock models.

Another great thing about the Walther PPQ is that it’s available in four different caliber variants. The 9mm caliber is the most popular of the bunch, but it also comes in .22 LR, .40 S&W, and .45 ACP. For beginners, I highly recommend the 9mm option. 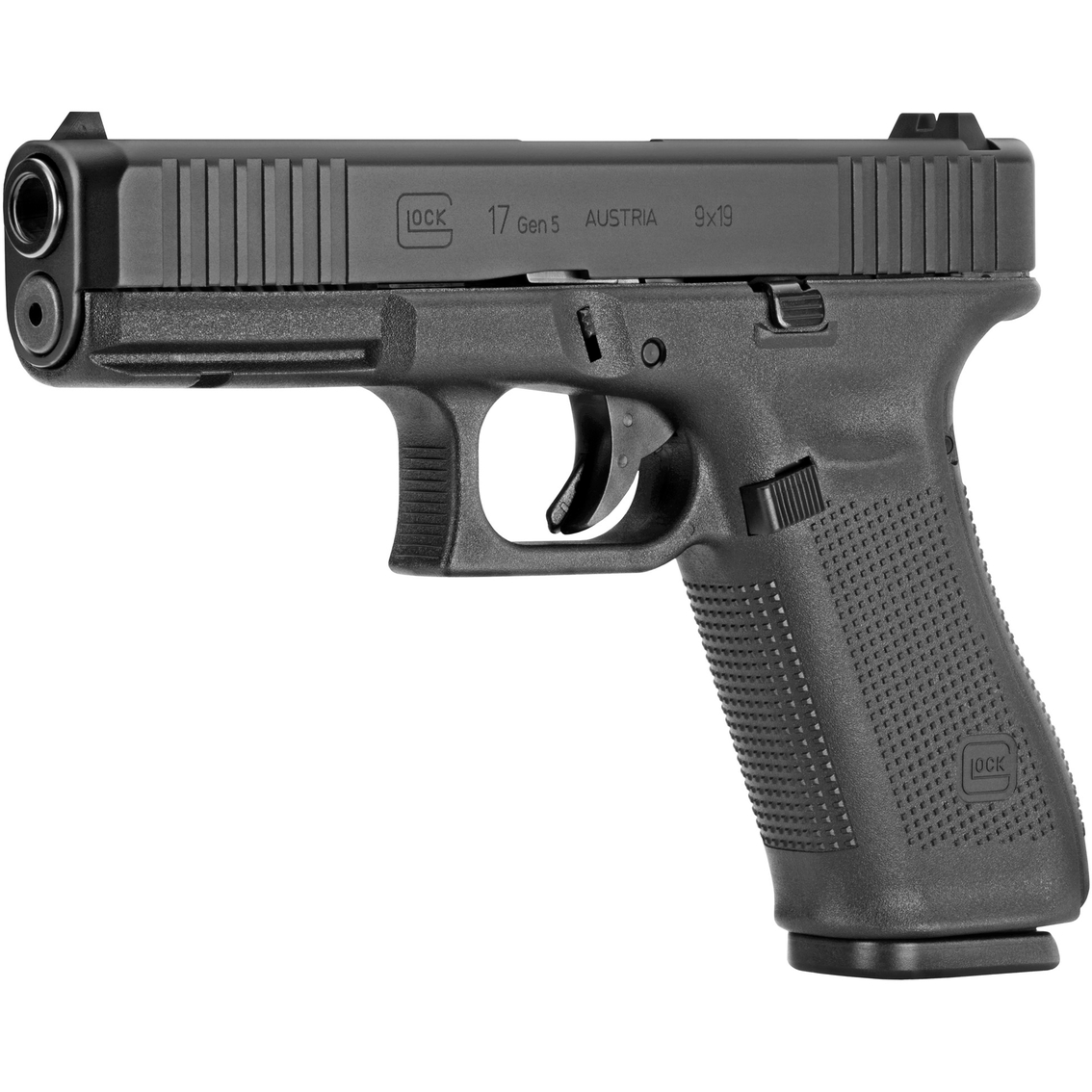 The Glock 17 is among the most popular pistols in the United States. Its top-notch reliability, longevity, and immense accuracy contribute to its nation-wide demand.

Dubbed as the “grandfather” of all Glock pistols, the Glock 17 is currently in its 5th generation. This makes it an old-time favorite of beginners and professionals alike.

This handgun is more commonly used by the police and military units rather than people who go for competitive shooting. It has a no-frills, straight-forward, professional design that doesn’t kid around. The gun finish doesn’t scratch, fade, or rust, even with constant use. Plus, it utilizes an ergonomic design that allows users to grip it nice and tight.

One of the best things about this pistol is that it’s quite easy to control, even in rapid-fire. To further improve accuracy, the Glock 17 comes with a red dot sight that allows you to better see your target when shooting. It likewise makes it much easier to switch between targets at a fast pace. This feature is particularly useful for

The Glock 17’s customization functions allow users to personalize their handguns to match their taste. You can even turn it into a rifle if you so desire. 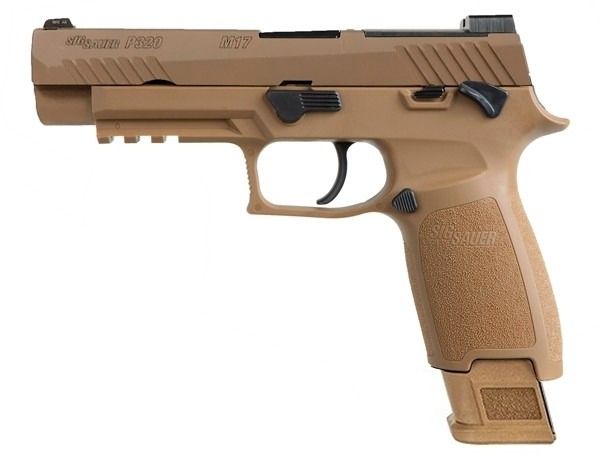 The P320 is another Sig Sauer pistol worth mentioning. It isn’t as expensive as the Sig Sauer P210 Target, but it’s just as reliable. It’s often compared to the Glock 19, primarily because the US government replaced the old M9 service pistol with the P320 rather than the latter, opening a lot of debate of which model is better.

Believed to have one of the best triggers found on a striker pistol, the Sig Sauer P320 impresses with its smooth pull, short reset, and crisp break. If used properly, it may very well outshoot most shooters in the range.

The only downside found in the Sig Sauer P320 is that it has a large and deeply curved trigger, which many users aren’t used to. It’ll be challenging for beginners to control. The trigger is quite heavy, as well. It may take a while to master the P320 fully, but once you do, you’ll be blown away by its tremendous accuracy.

The quality build of the P320 falls in the mid-range level. It isn’t as durable as the P210 Target, but the quality doesn’t affect the pistol’s overall accuracy and reliability.

Overall, the P320 is a big bang for your buck. It’s an excellent pistol that trains a beginner to the bone, and it’s moderately priced. 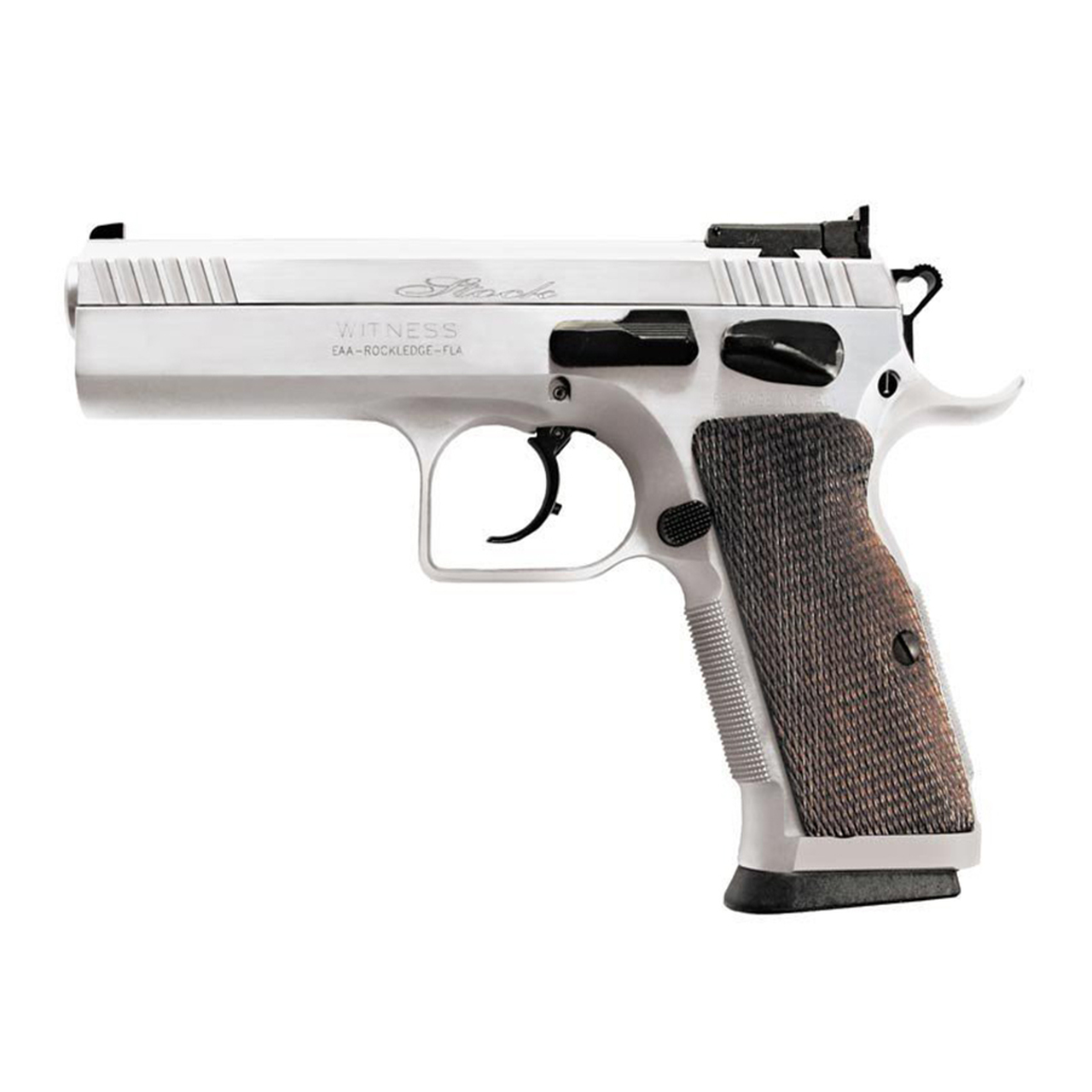 If you’re searching for an inexpensive CZ 75 clone, you might want to check out the EAA Tangfolio Witness.  This is an extremely accurate 9mm option.

The EAA Tangfolio Witness has everything you need in a target pistol: high accuracy, great ergonomics, solid recoil, and multiple caliber options. Other than the standard 9mm, it’s also available in 10mm, .38 Super, .40 S&W, and .45 ACP. In comparison, the CZ 75 has only two options to choose from, limiting a lot of users.

Outer appearance and durability aside, the biggest disadvantage found in the Tanfoglio Witness is in its internal construction. It isn’t designed to handle high chamber pressures, which may cause the gun to wear out faster than others.

Accuracy is top-notch, however, which is something every competitive shooter is looking for. Its recoil is similar to the one found in the 1911 series, wherein it perfectly balances the bullet’s momentum upon shooting.

Check Out Our Other In-Depth Gun Articles and Guides 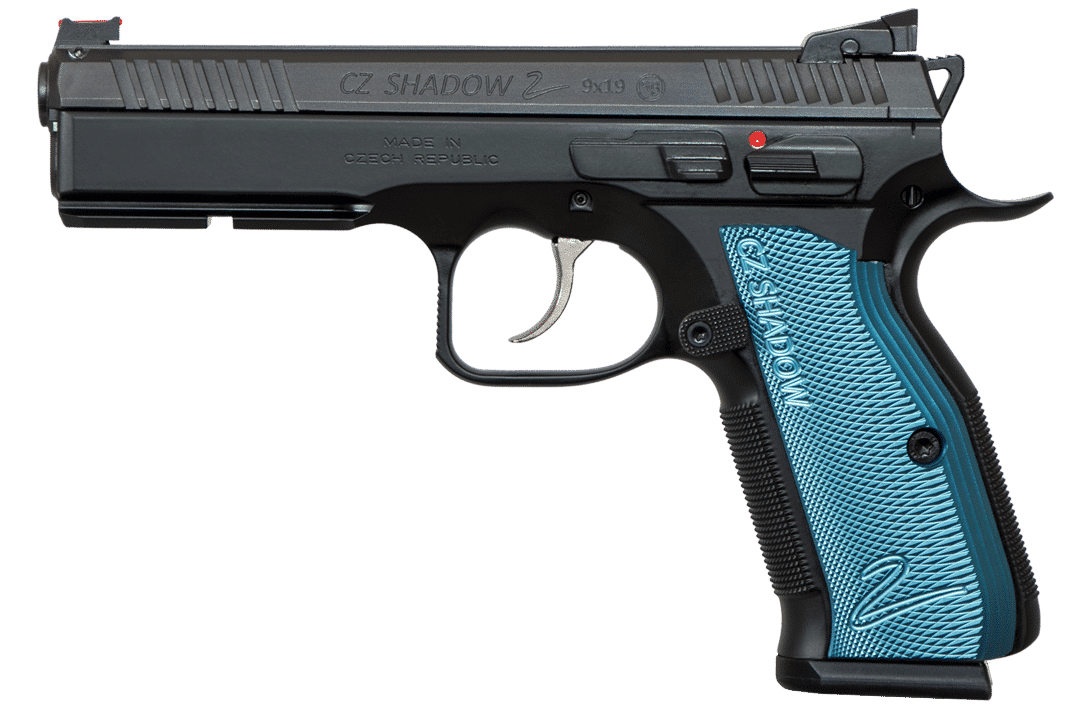 The CZ USA Shadow is a competition-ready pistol that’s well-known for its outstanding precision, professional-grade build, and note-worthy ergonomics.

When it comes to design, the USA Shadow comes on top. One glance, and you’ll immediately be stunned by its beauty.

The black and blue checkered aluminum grip is a personal favorite, but you can also find it in stealth grey. Both pistols have a corrosion-resistant black nitride finish and topped with an additional poly coat layer to further strengthen the outer coating.

If you’re looking for a custom pistol, we can help you out.

The USA Shadow is a heavy gun—one of the heaviest on this list, second only to the CZ 75 Tactical Sport. It weighs 46.5 oz, which may deter beginner shooters from buying it. However, most of the extra weight comes from the dust cover, meaning it can be replaced if need be.

This pistol achieves its almost-perfect accuracy rate by incorporating fiber optic sights for easier target aim. Combined with a high beavertail, three beveled 17-round magazines, and extra polymer recoil spring buffers, the USA Shadow is undoubtedly one of the best competition pistols out there.

My personal choice for the best beginner competition pistol is, hands down, the Sig Sauer P210 Target because it balances accuracy, reliability, and ergonomics to a T.

A budget-friendly alternative is the Walther PPQ, costing about half as much as the Sig Sauer P210 Target. It also comes in multiple caliber variants, giving you the freedom to choose an option most suited to your personal taste.