Our Favorite Handgun Options For Women

Women come in all shapes and sizes, and the right handgun for you is going to depend on a lot of factors.  At The Gun Source we’ve got reviews on the top-rated options any female would want to own.

In recent years, the number of women owning guns has increased substantially. In fact, a recent study suggests that roughly 40% of gun owners in the US are women—that’s more than a 14% increase over the past half-decade.

Women are more likely to use guns as a form of self-defense rather than for recreation. They’re less inclined to go sports shooting or hunting, so they mostly use guns that are designed for protection purposes.

For this reason, I’ve reviewed some of the best handguns for women for personal defense and home protection. By the end of this article, you’ll hopefully be able to buy the right handgun that suits your needs!

Top 5 Handguns for Women for Self and Home-Defense

If you’re a woman who wants to up her safety game or maybe you’ve been a lifelong gun owner who’s looking for something a little newer and more updated, then we’ve got you covered.  Here are some of the best handguns you can buy if you’re a gun-totin’ woman:

Among Sig Sauer’s many models, the Sig Sauer P365 is especially popular with women. Though compact, it has a high capacity of 10+1, 12+1, or 15+1, making it suitable for both self-defense and home defense purposes.

Sig Sauer P365 is a fantastic option for concealed carry. It perfectly balances size and ammo capacity, and since it’s so lightweight at only 1.2 pounds, you can carry it all day without feeling its weight.

The P365 9mm handgun is easy to shoot and the recoil is controllable. It has a good ergonomic design that makes it fit comfortably in the hand. The controls are easy to reach, even for women with small hands.

That said, it’s still much snappier than a full-size 9mm handgun. It requires a solid grip to function reliably. So if you’re planning to carry this gun, dedicate some training when dialing in your reloads.

The Best Handgun Guides on the Internet

Designed for comfort and ease of use, the M&P 9 Shield is one of the best striker-fired pistols you can get your hands on. It’s a 17-round, 9mm pistol, with interchangeable backstraps, steel three-dot sights, and reversible mag release for both left and right-handed shooters.

The M&P 9 Shield is as reliable as a gun can get. It has great mechanical accuracy, well-designed ergonomics, an ambidextrous slide stop/release lever, and a secure grip.

Like most mid-size polymer 9mm handguns, the M&P 9 Shield packs a punch. It’s a bit too large to be classed under the concealed weapon category, but it’s perfectly suited for action-oriented competitions, recreation, and home defense due to its ease of operation and maintenance.

That said, women with smaller hands might not find the M&P 9 Shield too agreeable.

Some might have a bit of trouble gaining a “high grip” on the weapon, which is important in terms of leverage and control. If you’re someone with small hands, test the gun first before you commit to it. 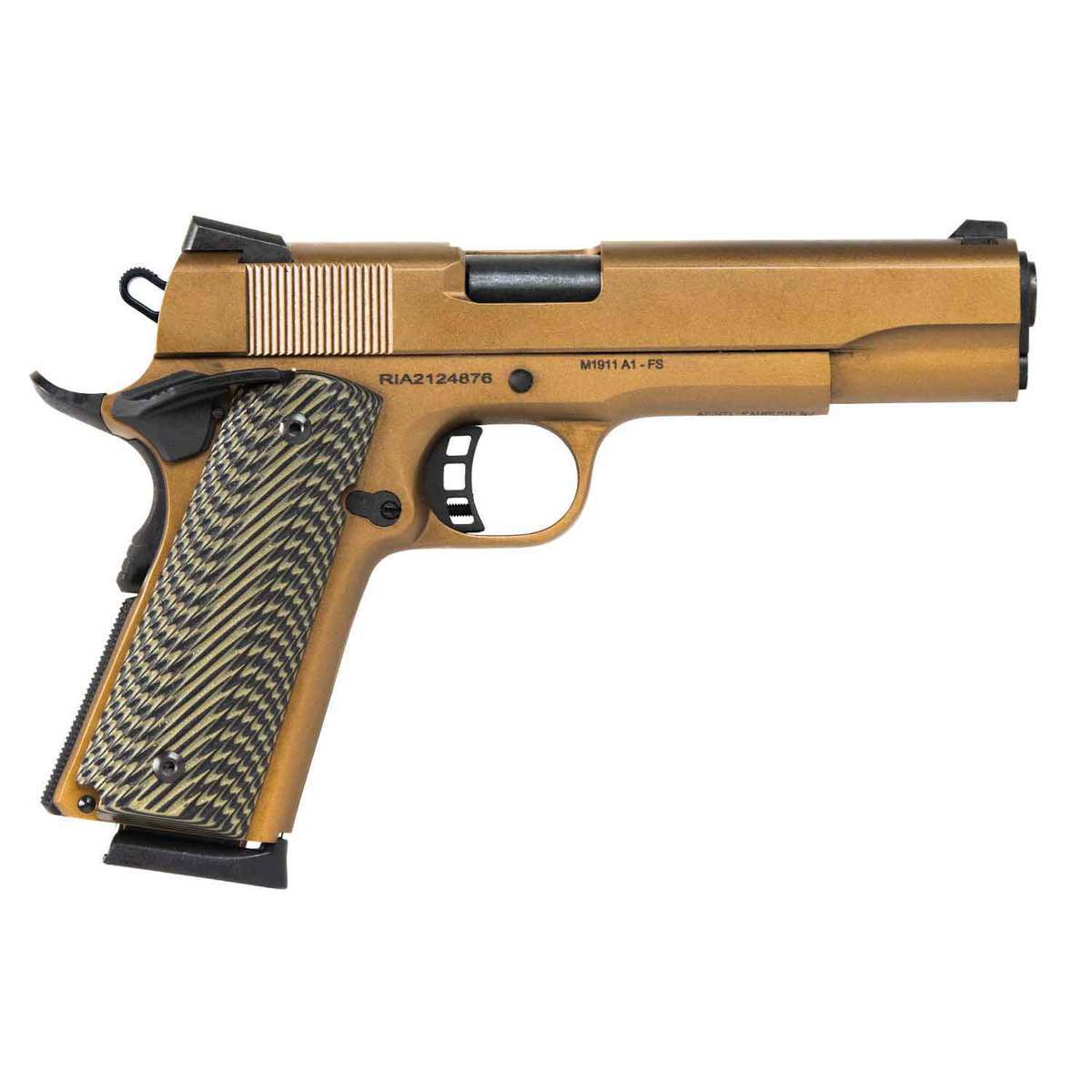 The Rock Island M 1911 is a budget-friendly single-action handgun that mimics the design of the first generation of 1911s. Like the older models, it has smooth wood grips, parkerized high-quality finish, and a fixed front and rear sight.

Equipped with a .45 ACP round, the Rock Island M 1911 provides a lot of kick when fired. The recoil isn’t too bad for its caliber type, but it’s pretty powerful—30 to 40% more than a full-size 1911. That alone makes this gun less suitable for target practice purposes; the hard recoil makes it difficult to shoot more than 100 rounds in a single range session.

But despite the strong recoil, the Rock Island M 1911 provides a crisp trigger. The trigger is nice and light, with a bit of short wall and pre-travel before the gun activates.

That said, this handgun is a bit lacking in the sights department. The sights are abysmally small and near impossible to track. Focusing on the tiny front sight can be a pain, especially for beginners.

Still, don’t let that disadvantage discourage you from purchasing a Rock Island M 1911. It’s an overall reliable handgun, with great ergonomics and a ton of customization features. 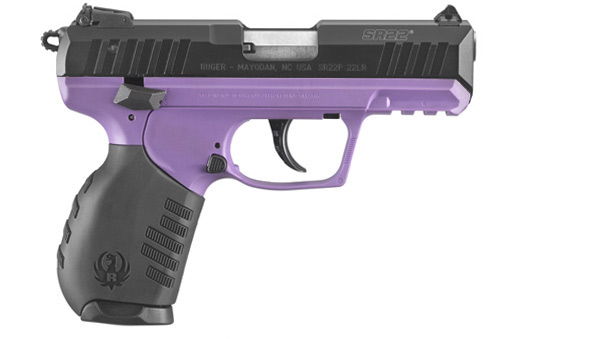 If you’re looking for something a bit more feminine in terms of appearance, check out the Ruger SR22 in Lady Lilac.

The SR22 is a compact semi-automatic handgun with a 10+1 capacity. It’s often used in target shooting, but it’s equally as reliable for self-defense and home defense. It fits nicely in the hand and comes with two interchangeable rubber grips, which is great for those with slimmer or wider palm configurations.

This .22 LR handgun is ideal for first-time gun users because it’s increasingly lightweight. Its low recoil and budget-friendly ammo make it a good option for target practice, providing newbies the opportunity to become accustomed to arming themselves. Furthermore, it features ambidextrous safety functions that double as a decocking lever.

If you’re not a big fan of the lilac color, fret not; the Ruger SR22 also comes in black and platinum silver. 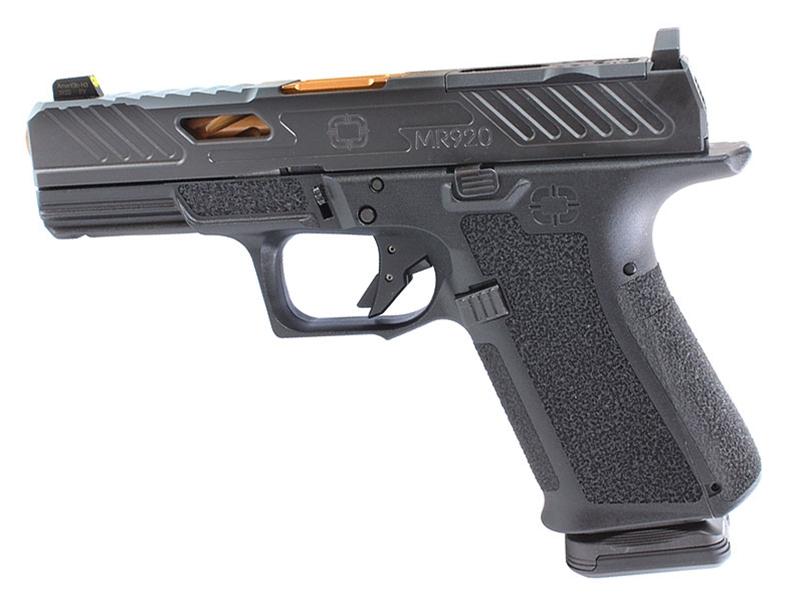 The Shadow Systems MR920 Elite isn’t the most budget-friendly, but with price comes quality. It’s the upgraded version of the MR918 Elite, with lesser recoil and higher controllability. The gun is ready to shoot right out of the box, plus it features interchangeable backstraps and an ergonomic form.

The MR920 Elite is outfitted with top-of-the-line 416R stainless steel, a flat-faced aluminum trigger, and a proprietary drop-safe. It’s heavier than most guns on this list at 1.4 pounds, but it’s incredibly reliable and accurate once you get used to the weight. The break and reset feel crisp and bullet ejection is as consistent as a high-quality handgun can get.

A Few More Factors to Consider

When buying a gun, always take individual characteristics into account, such as your hand size, your body stature, and the reason why you’re buying the gun in the first place.

Here are some important factors to consider when buying a handgun:

For the uninitiated, the term “caliber” is used to describe the measurement of a bullet’s diameter. The higher the caliber, the more powerful it is depending on the propellant and ballistics.

Small- and intermediate-caliber rounds can be just as lethal as larger rounds, but larger rounds (i.e., 45 ACP) have the advantage of knockdown power, allowing you to neutralize a threat with one shot.

9mm is the quintessential handgun caliber. It’s hands-down the most popular caliber type in the US and most of the world. In fact, more than 60% of the world’s law enforcement agencies use a 9mm caliber. It’s reliable, universally usable, and reasonably cheap.

Other caliber types are as follows:

It’s important to note that all real guns can be deadly, regardless of the caliber size. There’s no such thing as a “non-lethal” gun caliber; all guns can kill. As such, you shouldn’t buy a small-caliber gun in hopes that it’ll simply scare away an assailant without lethally injuring them.

When buying a gun, search for a model with a light felt recoil or kickback.

Guns with light-felt recoil are easier to handle and more comfortable to shoot by women with poor hand strength.

An example is the Smith & Wesson Shield EZ in . 380 ACP, which is specifically designed for those with arthritis and people who have difficulties controlling an automatic defensive pistol. It’s chambered with .380 rounds, so it naturally produces less recoil than standard 9mm guns.

Gun recoil is determined by the velocity of the bullet, the weight of the bullet, and the size of the gun. But since recoil strength varies from person to person, it’s always best to personally test the recoil of the gun before buying it under your name.

If you’re planning to use a gun for home defense purposes, always go for a full-size gun.

Compared to other sizes, full-size guns have the best accuracy.

They’re the largest and heaviest type of handgun, which doesn’t make them ideal for concealment purposes, but they’re the best option for home protection and training.

They hold up to 20 rounds, which is more than enough to protect you in a life-and-death scenario.

Compact handguns are slightly easier to conceal than their full-size alternatives, but the difference in size isn’t so significant. They’re small enough to carry and big enough to shoot with decent accuracy.

Sub-compact handguns have a barrel length of fewer than four inches and an overall length of six or so inches.

This makes them small enough to conceal under a jacket or inside a small purse.

However, do note that most sub-compact handguns have a small magazine capacity of only 7 to 10 rounds. They’re also a bit more difficult to shoot than full-size and compact guns.

Micro pistols are the smallest type of handguns. They’re so small they can easily fit in the front pocket of your jeans.

These guns are suitable for when deep concealment is a priority (or when you can’t be bothered carrying a bag). They carry even fewer rounds than sub-compact handguns, sometimes less than five.

Micro pistols are the most difficult to shoot due to their significant felt recoil. For this reason, micro pistols should only be used by trained professionals or experienced shooters.

Weight is another major factor to consider when purchasing a handgun, especially if you have weaker arms or are less experienced with shooting.

Heavier handguns have the advantage of low-felt recoil, but with that comes the challenge of holding your arms steady for a more accurate aim.

Lighter handguns are more comfortable to carry throughout the day, so they’re best suited as concealed carry weapons, but they’re less accurate than heavier handguns.

Look for a gun that offers the best of both worlds: heavy enough to supply a manageable recoil, and light enough for comfortable shooting. Usually, this falls in the 1 to 1.5-pound range.

Women have naturally smaller hands and fingers than men, so the placement of the trigger can be a problem in some guns.
To shoot safely, your thumb crotch (i.e., the web between your thumb and index finger) must be positioned in the center of the backstrap. The index finger’s distal pad must also be on the centerline of the trigger to achieve a consistent trigger press.

There you have it; my top 5 list of the best handgun for women!

Handguns come in different types, calibers, and models, so there’s no one-word answer as to what the best handgun for women is.

But if I had to choose, I’d say the Sig Sauer P365 comes pretty close to “perfect.” The handgun shares the same performance as a service pistol, but in a smaller package—and it performs surprisingly well for its size.